Excellent article about gun ownership and responsibility. Get all the facts before you buy. Original article by By Jay Willis.  Link to original article:  https://apple.news/AYLwj4TrHQ-WlU9ab2sDQ6A

Owning a Gun in America Is a Luxury

Extreme violence comes with a price for everyone involved: the suspect, the victim, the families of both, and witnesses in close proximity. Whether you were directly injured, survived physically unharmed, witnessed the attack, or simply are related to someone involved, it’s important to understand what you may experience moving forward. This is a complex topic to fully understand, but a basic knowledge of what may be experienced is so essential.

You’re Not Alone – No one leaves a violent encounter unchanged. No one. The degree to which you are affected may differ person to person, but no one walks away unscathed. I truly believe this is important to note to give yourself permission to feel however it is that you feel. You may feel embarrassed or ashamed for being affected, and it’s important to know you’re not alone.

Everyone Responds Differently – Along these same lines, it’s important to…

It depends on who you ask.  And it may not be the same for everyone.

I would like to suggest you start with 2 basic questions:

Consider the time it took to learn to drive an automobile.  One lesson, two, 10?  First you had to learn how to operate the vehicle, turn the ignition, position the seat, mirrors, turn signal operation, how to put it in gear, gas, brakes….and all those other buttons.  Not to mention how to properly maintain the vehicle so it is reliable.

Let’s not forget the laws regarding driving.  You have to learn the laws before you start driving.  There is a test you must take, just to be sure you get it right.  After all, a car can be considered dangerous to yourself and to others, when not operated correctly and legally.

So, you sign up for an all day, 8 hour class to learn to shoot.  Then, you wait 30-60 days, or more, before going to the range to practice what you learned in class.  How much do you think you would remember?  Would it be enough to save your life in a deadly confrontation?

How many classes, and how many times did you practice driving before taking your driving test?

It’s pretty simple, more training and practice is always needed to become competent at any skill.  Especially one involving the possibility of loss of life. 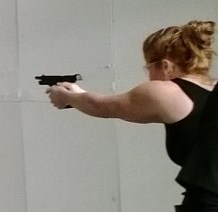 Learning to shoot a handgun can be a fun and exciting experience when done in a comfortable, safe environment with professional instructors.  This 5 hour class is a great refresher course for shooters with limited experience, but is specifically designed for students who are new to guns with no shooting experience.  Once you have completed one of our classes, you are invited to join our shooting club, (no charge) The Scarlet Pistols, and enjoy shooting practice with our instructors and other student alumni.  It’s a great way to stay current and practice your skills with other shooters in a friendly environment.

Women and Guns is proud to announce the revival of the Scarlet Pistols Shooting Group! Beginning July 3, 2017, and every Monday there after, any woman who previously attended any of our shooting classes is welcome and encouraged to attend.  Our goal is to encourage women to practice the skills they learned in class while enjoying an afternoon of fun with other women.

We will meet at the New Lakewood Shooting Range,  2:00pm is our target start time, but late arrivals are fine, (we realize traffic can be a factor). The range is open until 9:00pm.  The range fee for ladies is $12.50 per lane, $10 for an additional shooter sharing the same lane.  Friends and family are welcome to attend, but must be 18 years or older, and have some basic firearms safety training to join our group.

Women and Guns will provide tips to improve your shooting techniques.  Bring your own guns and ammunition, or plan to rent a gun at the range and purchase ammunition and targets.  If it is your first time to the range, there will be a short safety video and the usual paperwork to complete before you start shooting.  Depending on the turn out, we may even have a “just for fun” shooting competition!

If you have not had a chance to experience the new Lakewood Shooting Range and Welchers New Gun Shop, plan to visit them soon.  You won’t be disappointed!

See you at the range!  Janice

If you missed the Facebook post or are not on our email list, there is still time to RSVP and attend our first Women and Guns Student Reunion at the new Lakewood Shooting Range! Show up at 6:30 for registration and safety briefing. Shoot from 7-8pm, just $12.50. for ladies. Free instruction and targets. Bring your own guns and ammo, rent one at range, or borrow one of ours. Friends and family welcome! Questions? Send me an email or message me on Women and Guns Facebook page. See you at the range!

Women and Guns offers private lessons for students looking for a one on one learning experience.  Registration must be completed online or by phone/email. (Click on the above link.)

Location: Tacoma, Washington.  We start in the classroom, then continue to live fire at the New Lakewood Range.  Contact us via email or phone for questions or scheduling: womenandguns.co@gmail.com

WOW!!  Amazing practice session at Welchers Gunshop and new Lakewood Shooting Range. The place is first class all the way to the beautiful laminate flooring throughout. The range staff are professional, friendly and very helpful. RSO on the floor at all times, plus security cameras. The air quality in the range is outstanding. 16 shooting stalls are now open, all with electronic target carriers. And LOTS OF SPACE behind the shooting benches, no crowding or bumping into people. A+ in every category. I will be a regular customer. The retail store is spacious and well stocked, prices are very competitive.
Check it out, Bridgeport exit off of I-5, right next door to the Ford dealership. Lots of parking.